By Maria Duffy. First published on Wednesday 15th October 2014. No Comments so far.

Coming out of the fog 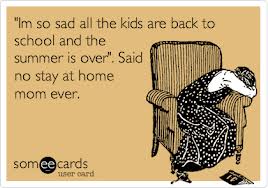 Well hello, hello, hello!  I thought it was about time I blew the dust off my blog and started using it again.  I’ve been all morning cleaning and polishing it so make yourself a cuppa and come on in.  And while you’re here, maybe you’d have a look around my new website, designed by the lovely Andrew at Design for Writers.  Now if only I could think of something to say…!

Maybe I’ll start with filling you in on how my last few months have gone by in a blur – a nice blur though, it has to be said.  Now I love the summer.  I love waking up and not having to put on the heating.  I love being able to step into a summery dress and slip on a pair of flip-flops.  I love all the smells and the sounds and the overall happy vibe that summer brings.  But summer is also the enemy of the mammy writer!  I go from having quiet days filled with writing to having four children at home for the holidays.  Now there’s definitely something to be said for not having that crazy, headless-chicken rush in the mornings where fights erupt in the kitchen over who’s having the last slice of ham in their lunch or who ate all the nutella.  Where the one-sink bathroom means four sets of gargling kids vie for spitting room and inevitably more toothpaste ends up on the wall than in their mouths.  It’s nice not to find myself half dressed with odd shoes, screaming like a fish-wife for the children to get in the car and knowing I’ll have to go back into the house at least twice because someone has forgotten their schoolbag/lunch/football boots.

And yes, now that the summer is over, chaos has again ensued in the mornings.  But at least when I make the final drop off at 9 o’clock, I can cheer all the way back to my lovely quiet house.  Or not.  Because as if my life isn’t hectic enough, I’ve finally given in to years of tears and begging from my children (which you can read about here) and we’re now the proud owners of one mad, energetic, annoying, head-wrecking, adorable dog!  Getting Bella in August was a brilliant idea.  The children were off school and they made good with their promises of walking, poo-pick-ups and general minding.  I was able to at least squeeze in a few hours work every day.  But when September arrived and I waved them off to school, my happy dance was replaced by lots of long, energetic walks – even in the rain!  At least then she’d settle down for a nice long sleep so I could sneak into my office and do some writing.  Not.  After half an hour she’d be awake again shouting: ‘What are we going to do now? Can we go for a walk again? Feed me.  Tickle me.  Play with me.  Chase me.  Can I eat your shoes?’  Now may I point out that she didn’t actually say all this, but I could read her mind. 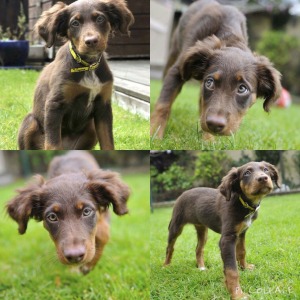 But it’s six weeks now since the children have gone back to school and things are finally beginning to settle down.  Bella is still a bit crazy but I’m finally figuring out how to be the boss of her and not the other way around!

Now in book-related news, most of you will know that my fourth book, One Wish, was published here in Ireland in July.  It was a very exciting couple of months that saw One Wish in the Irish Best Seller list for four weeks.  It was also picked as book club choice for the month of August on Ireland AM and you can see my interview here.  But the treadmill of a writer’s life sees me well stuck into book 5 now and I’m absolutely loving it.  I don’t have a definite publication date yet and the title is still in negotiation but I’ll be back with more news about all that at a later date.

I could go on and on, but I think that’s enough babbling from me for now.  I’m hoping to blog a lot more often now that my bum is firmly perched back on my writing chair so I’ll catch up with you all again soon.