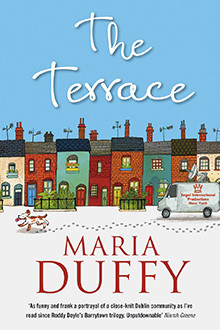 Nestled in the heart of Dublin city, St Enda’s Terrace is like any other close-knit community: warm, colourful, looks after its own.

But behind closed doors lie secrets . . .

In Number Eight he wants a baby, she doesn’t. The guy a few doors down just wants to find love. Across the street a single mum struggles to cope. While the people next door might appear to have it all, their mortgage holder knows different.

When the street syndicate wins the National Lottery, it seems that things are looking up. Enter a New York production company on a mission to document a ‘quintessential’ Dublin community – just as it becomes clear that the winning ticket is nowhere to be found.

Facades begin to crumble in the scramble to uncover the missing ticket and, as the gloves come off for the once unremarkable residents of St Enda’s, it’s game on with everything to play for.

You can purchase the letter using any of the following links to leading retailers:


The Kindle cover for The
Terrace
in the United States looks like this: